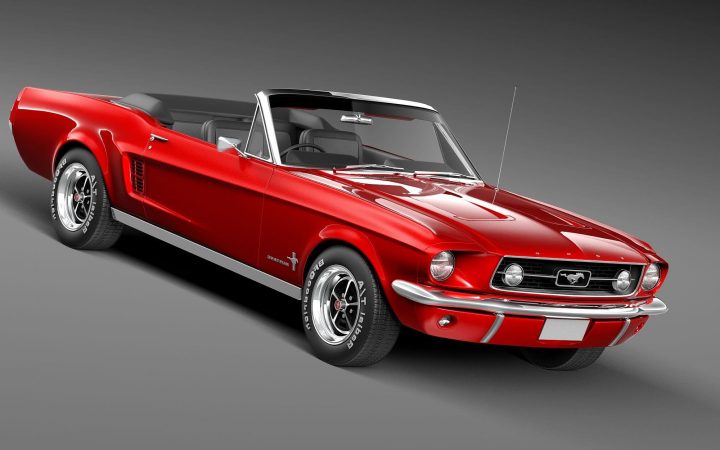 Ford Mustang is an iconic car, which gave birth to such term as “Pony Car”, starting a very special era in the American automaking industry. The first generation of the Ford Mustang (1964 — 1973) was based on the Ford Falcon family sedan. The first production Mustang rolled off the assembly line on March 9, 1964, being the 1965 model. The promotion of the car was accompanied by an active advertising campaign. It was one of the most successful premieres in automotive history. More than one million Mustangs were sold in the first 18 months. 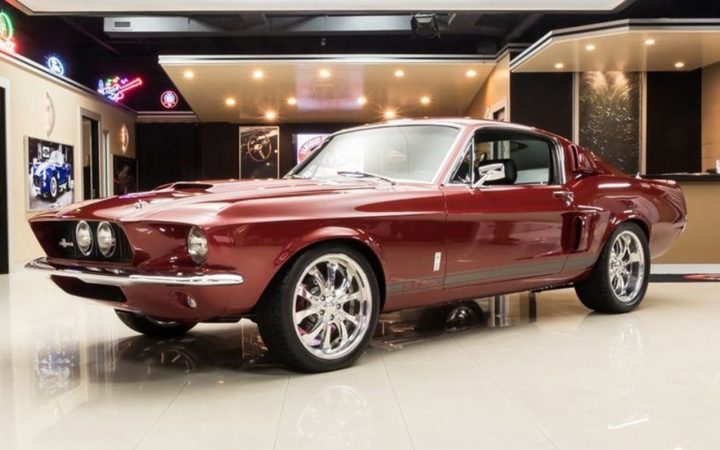 The first Mustang left the assembly line on the morning of March 9, 1964, and by the end of that year, 263,434 cars had been sold. In mid-sixties, a fastback body model was introduced, aimed against the rival Plymouth Barracuda and looking more harmonious than the base coupe. The convertible-bodied car was also very appealing externally.

The initial version with a 2.8-liter engine (102 hp) accelerated only up to 150 km/h. But the list of options included V8 engines with power up to 380 hp, automatic transmission, and a lot of other equipment. The first Ford Mustang was offered with three types of bodies: coupe, fastback, and convertible. Over the years, it lengthened from 4,613 to 4,923 mm. 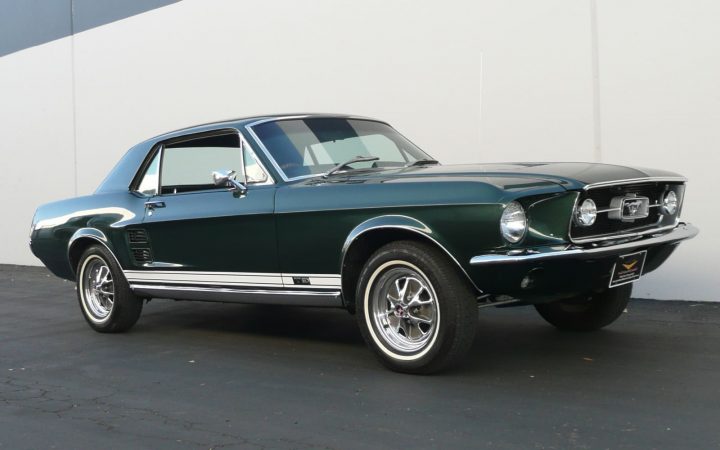 The design was based on the stylistic features of the successful mid-fifties Continental Mark II luxury coupe, with its characteristic proportions with a long hood and short trunk and body side plastic with a kink in the rear wheel arch area. Compared to it, however, the Mustang’s appearance was less austere and more dynamic.

From a technical point of view, the car was not a revelation. The base engine was a well-known six-cylinder power unit from the Ford Falcon, bored to 170 cubic inches (~2.8 liters.) It was equipped with a three-speed manual or two-and three-speed variator. 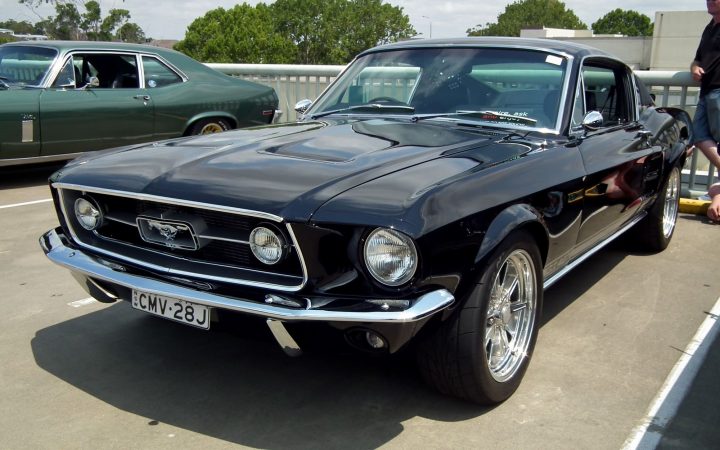 The front suspension was generally borrowed from the Falcons, and was a variation of the conventional parallel-linkage suspension, using two wishbones, with the shock absorber and spring assembly removed from between the wishbones and placed over the top lever. This suspension (called “double-wishbone” in America) was a bit more compact than the usual parallelogram suspension, in particular freeing up space for the large V8 engines. An anti-roll bar was available as an option.

The rear suspension was dependent, with longitudinal semi-elliptic leaf springs and a rigid drive axle beam.

The base brakes were drum on all wheels, a vacuum booster being an option. Completing the picture was a worm steering mechanism with circulating balls from Falcons with a high transmission ratio (power steering in those years was in this class was a relatively unrequited option). 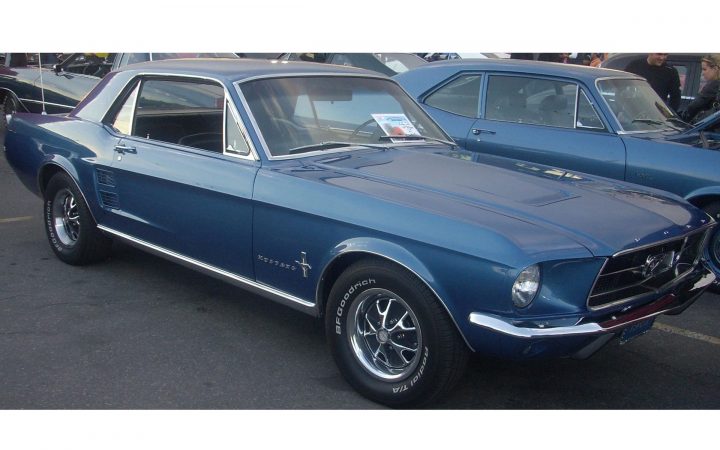 As a result, though the handling and driving qualities of the car were better than those of the base model, the Ford Falcon, due to a lower center of gravity and modified chassis settings, but not by much.

By the 1967 model year, the Mustang had grown in length and height, and, accordingly, most of the body panels transformed. The front end looked more “aggressive”, and there was a new fastback, with the rear window and trunk lid now on the same line. 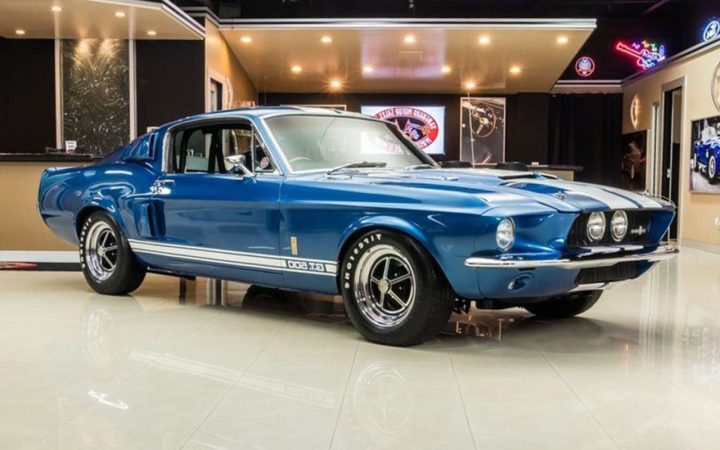 The Ford Mustang Shelby GT500 became especially popular thanks to the cooperation of Ford Motors Company with the famous racer Carroll Shelby, who won the famous 24-hour race at Lehman in 1959. This legendary man began the epochal production of Mustangs with the Shelby prefix. Thanks to Carroll Shelby, all the most famous and epochal models of Mustangs were built. With his help, Ford achieved a dominant position in various racing events in the sixties. 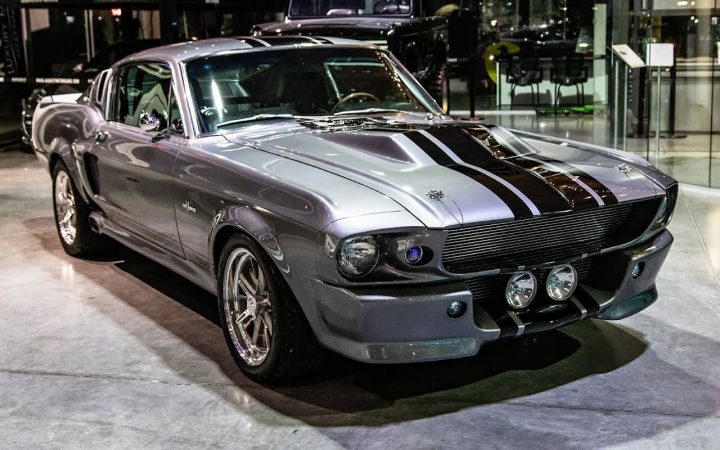 Before the arrival of the more-charged GT500, the less powerful GT350 model with a 4.7-liter engine was produced, which had a beautiful white body coating called Wimbledon. The snow-white body had blue stripes. A distinctive feature of the model was the absence of rear seats, which greatly reduced the weight of the car. We must remind that production of the powerful version GT500 with a 7-liter engine and 355 horsepower started in 1967. The mighty 428th unit accelerated the car to the first hundred in 6.5 seconds. Thus the maximum speed of the car reached 220 kilometers per hour, and this was quite enough to successfully conquer racetracks and drag strips. The Ford Mustang Shelby GT500 features were truly impressive for those times. The car was equipped with an improved suspension, improved disc brakes on the front wheels, an improved automatic three-speed gearbox, or a manual four-speed gearbox.