Although Russia is far not in the Top-10 auto manufacturer list, it’s still a prominent vehicle market with its own peculiarities. Being a serious player in the industry, the Russian automobile market is represented by industrial vehicles, agile passenger cars, and a few luxury Soviet models that were very popular in the previous century. Let’s review the most prominent Russian car manufacturers and their logotypes.

Although the Russian car market is now represented by affordable and user-friendly city cars and business vehicles, some companies used to produce limousines and luxury cars. This is a diverse market that boasts an interesting design of models and ever-lasting quality.

Lada cars are fabricated by AvtoVAZ, which was shaped from a partnership between Fiat and the Soviet Department of Foreign Trade. AvtoVAZ makes more than 400,000 vehicles annually under its Lada brand and even produces the autos of Renault-Nissan joint brands: Renault, Nissan, and Datsun. Vehicles fabricated by AvtoVAZ were at first promoted as Zhiguli brand yet since 1973 they are widely known as ‘Lada.’

This Russian vehicle brand has a long history and strives to fulfill the best western traditions right from the beginning of its existence. Although it’s far from luxury extravagance vehicles, it boasts reliability and mobility. Its affordable price, unwavering quality, basic user-friendly mechanics and versatility have made it an outstanding Russian vehicle producer in post-soviet countries.

On the emblem, you can see the sailboat. It used to be the only transport to transfer loads by river Volga.

This Russian car maker essentially represents considerable authority in the creation of rough terrain vehicles, SUVs, buses, and trucks. UAZ is notable for military vehicles (the most famous is UAZ-469.0020). The company started producing vehicles during the Soviet War period: it began as a simple assembler & development in 1954. Following the disintegration of the Soviet Union, UAZ turned into a business entity and contributed a noteworthy volume of sales to the Russian market during the 1990s.

The logo depicts a symbolic image of seagull – it’s the last version of logo introduced in 1981.

This auto organization is known to be the biggest Russian vehicle maker that guarantees the safety and reliability of its cars. Although Kamaz vehicle brand is mostly known for its trucks and motors, yet it also produces excellent Cab over trucks. Today, it produces and exports heavy-duty transport to numerous countries over the world, and strengthened KAMAZ trucks are additionally utilized by the Russian armed force.

The manufacturing plant is in charge of delivering over 43,000 trucks annually. It is the biggest truck maker in Russia and the CIS and these trucks have won the Dakar Rally 14 times. Isn’t it the greatest proof of quality?

The horse on its emblem is a symbol of speed and durability. 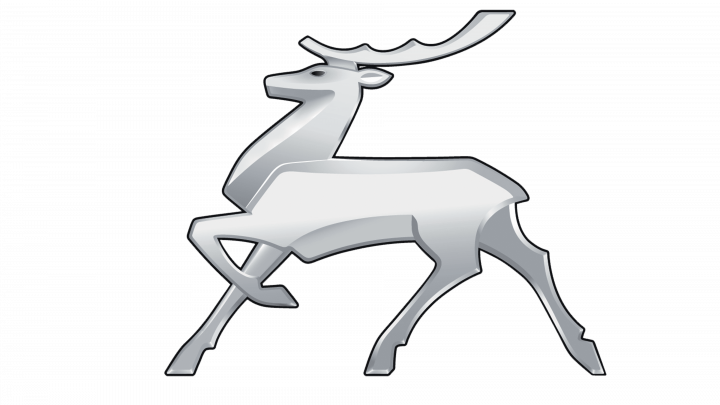 Originally called as NAZ (abbreviated after Nizhegorodsky Avtomobilny Zavod), the company was renamed as GAZ (Gorkovsky Avtomobilny Zavod) in 1933. Initially, it started as a partnership between the Soviet Union and the Ford Motor Company. Their first produced vehicle was ‘Ford Model A’ and model AA, which were later renamed into GAZ-A’ and GAZ-AA’.

It is presently one of the main makers of Russian commercial vehicles. In February 2011, GAZ Group established a partnership with General Motors to start assembling Chevrolet Aveo vehicles and recently, this Russian vehicle maker signed a long-term contract with Volkswagen Group.

The deer depicted on the GAZ logo represents speed and agility – main characteristics of the brand cars.

Started in the Soviet Union to be used instead of popular ‘GAZ Pobeda’, this Russian vehicle brand was intended to meet the demand for extravagance autos that were step by step being introduced in Western Europe. Volga cars had a very different design from the fundamental construction of Lada, so it quickly turned into the choice of rich people, such doctors, legal advisors, and political delegates.

Initially, the Volga model was created as a substitution for the strikingly popular ‘GAZ-M20 Pobeda’ a moderate size vehicle. In spite of the consistent modernizations, it was hard for the Volga to stay competitive on the market, so production was discontinued in 2010. Altogether, 639,478 Volgas were created from 1956 until 1970.

The organization was established in 1916 with the main purpose of assembling F-15 1.5 ton licensed trucks. However, the plans were not actualized due to the October Revolution and the Russian civil war. ZIL produces its first vehicle, the ‘AMO-F-15’ in 1924. The most acclaimed model of their last Russian Limousine was the ‘Zil-11’, an armored car that utilized for driving governmental authorities and other important personnel their official visits.

Amid the 1960s, some street paths in Moscow that were committed to Russian vehicles important government and military representatives of the Soviet Union were called after this Russian vehicle brand, the Zil lanes. In 2012, the Russian vehicle organization stopped producing its brand cars and now exists just like a real-estate development site. That marks the end of the epoch.

Those are the most prominent Russian car brands: their cars were put into mass production during the Soviet and post-soviet period. Each brand was focused on its own niche (luxury cars, business vehicles, usual city streetcars, etc), that’s why the Russian auto market is so diverse.