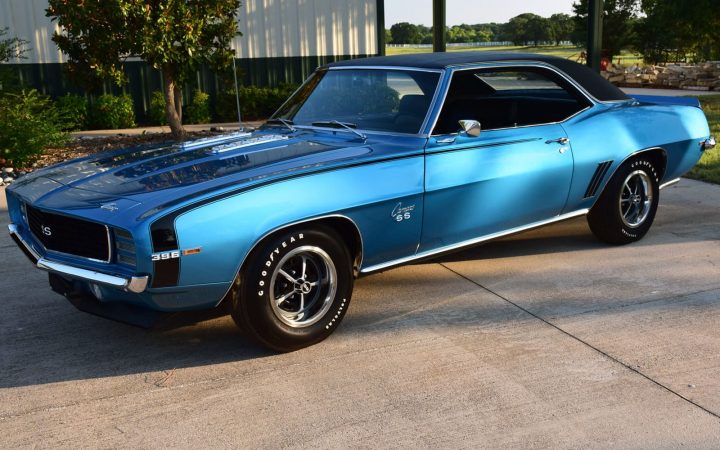 Announced in 1966, the Chevrolet Camaro sports car was created to fight the Ford Mustang, which had formed a new class of cars and gave birth to the culture of “pony cars” – compact rear-drive two-door coupes with a sporty disposition and a reasonable price tag.

Chevrolet could not sit back and watch the incredible success of Ford, so the number one task for the American automaker in the mid-sixties was to develop a car worthy to fight for leadership in the new market. August 11, 1966, the first Camaro was born in Norwood, Ohio, which marked the beginning of the era of the legendary car family.

There were produced about 700,000 copies of the original model, and then it gave way to the 2nd generation of Camaro. The first generation of Chevrolet Camaro was available in two-door coupe and soft-top convertible solutions. The body dimensions of the icon depended not only on the body type but also on the model year. 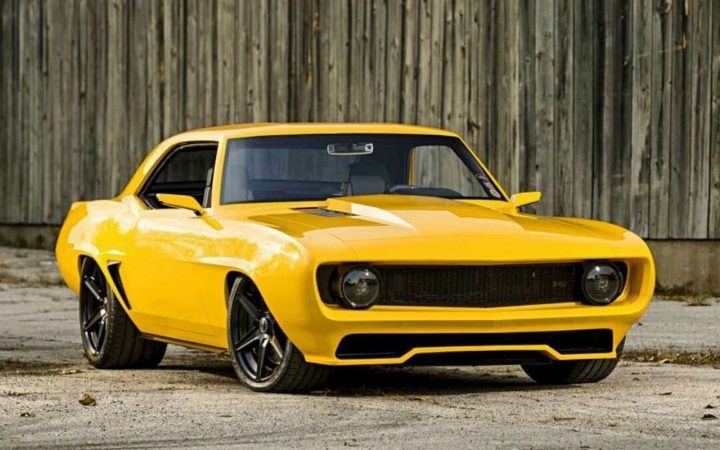 The 1969 Camaro saw many notable changes. The grille is set deeper and has a different shape, the taillights are longer, thinner, and split into three segments.

Additional wider trim on both sides of the car extends from the front wheel arch to the rear. The Camaro also got new fenders, grille, and rear. Inside, the Camaro gets more comfortable Endura seats, and rubber dampers are also available, as well as two SS system air intakes. A special air intake cutout on the hood. Also included a special air cleaner. 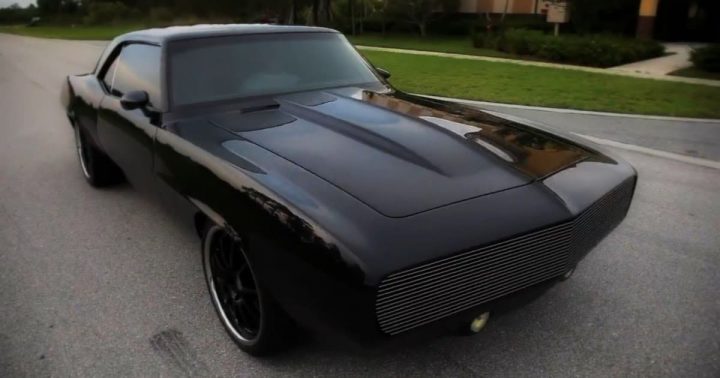 The peculiarity of the original Camaro is the large choice of engines and transmissions installed, which in total formed 18 powertrain combinations. The basis for the first generation of Camaro is the rear-wheel-drive “F-body” platform, which implies the following body scheme: the central and rear parts – a single supporting structure, the front part – a powerful sub-frame. The front axle is equipped with an independent suspension on the short wishbones, and the rear axle is suspended by leaf springs.

The main advantages of the car can be attributed: a beautiful appearance, powerful engines, good handling, acceptable characteristics of the dynamics. Among the disadvantages are a cramped interior, a modest trunk, high fuel consumption, cheap materials in some parts of the interior decoration. 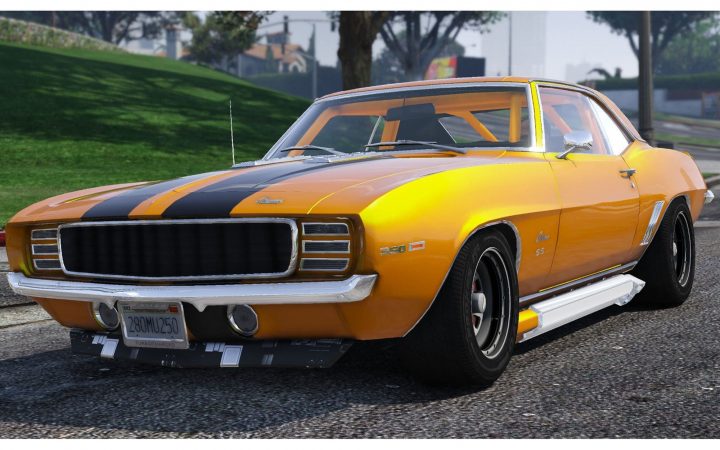 The most affordable Camaro was the one with a 3.8-liter, 140-horsepower six-cylinder in-line configuration, equipped with a three-speed manual. But such a “naked” version was not too popular, while there was a huge demand for copies with RallySport and SuperSport packages. The RS model has had some changes to the exterior, the most noticeable of which was a different design of the front end with headlights hidden behind the grille, and the SS model had a huge 6.5-liter V8 engine with an output of 325 hp. (later 350 and 375 hp). Interestingly, these two packages could be combined in one car, which received, oddly enough, the nameplate RS/SS.

The main idea of the Super Sport modification, better known to the general public as the Chevrolet Camaro SS, is to give new power and distinctive sports features to the basic versions of the Chevrolet muscle car. 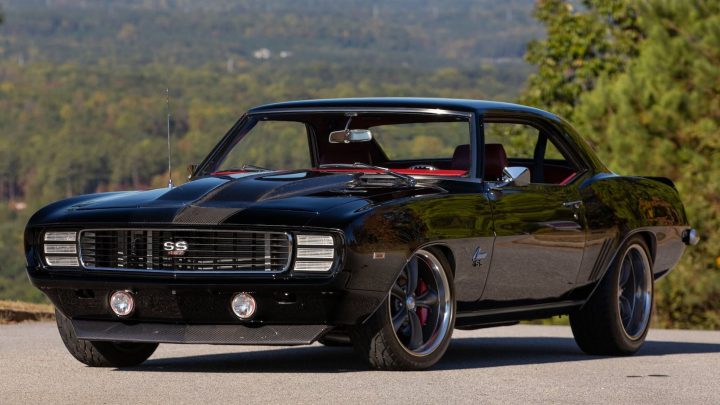 For these purposes, in every new generation of Camaro designers take into account the possibility of installing the company’s top V8 motor, while at the same time not forgetting about the lightness and compactness of the entire construction.

The 1969 Camaro SS was available in a coupe and convertible versions. Even the first-generation budget Camaro SS had front disc brakes as a basic feature. However, for a fee, 206 safety enthusiasts ordered the option to install JL8 disc brakes on all four wheels.

If we talk about the version Camaro SS 1969, there was an engine of 5.7 liters, which had a capacity of 295 hp. There was also a modification, which had a capacity of 325 and 375 hp per six liters. The engine was treated seriously, and not only did it offer tremendous power, but it was also outstanding in performance and longevity. That made the 1969 Chevrolet incredibly popular. 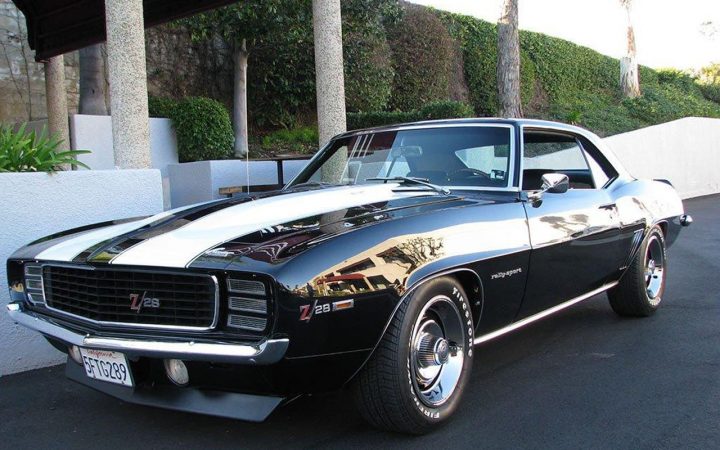 Another best-seller was the Z28 with a sportier suspension, tweaked exhaust, company stripes on the hood, and a 5.0 liter ‘eight’, which produced 290 horsepower, but many said that the figure is obviously understated and in reality, the power of this beast is much higher. Z28 was equipped only with the manual transmission, while for other versions an automatic transmission was available.

By the time the 1969 model was released, the Chevrolet Camaro was still acting as a catch-up, major competitor in the form of the Ford Mustang. It was thanks to the 1969 Chevrolet Camaro Z28 that the manufacturer was able to not only catch up with the competition but in some ways even surpass it. Not the least role in this was played by the victories of racer Mark Donohue. We think everyone understood what kind of car drove the car racer. 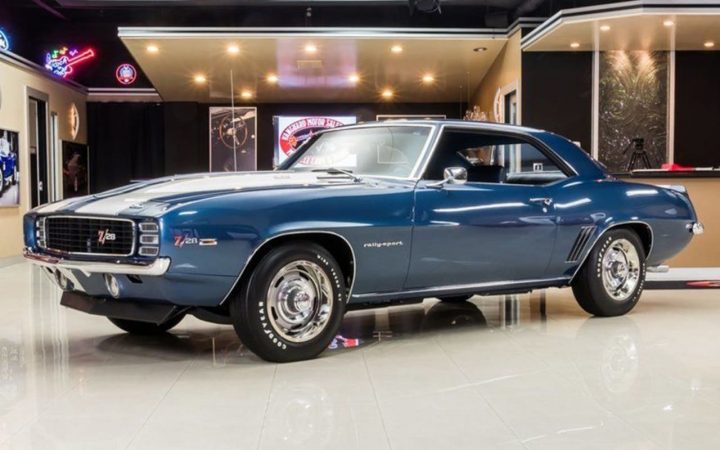 The standard 1969 Chevrolet Camaro Z28, had a 290 horsepower, 4.9 liters, eight-cylinder engine. This allowed the car to reach 100 km/h in 7.4 seconds. Unlike the classic muscle cars, the 1969 Chevrolet Camaro Z28 was not as straightforward in its acceleration orientation. The original front and rear spoilers were a big part of this, as they improved handling and boosted the car’s aerodynamics. 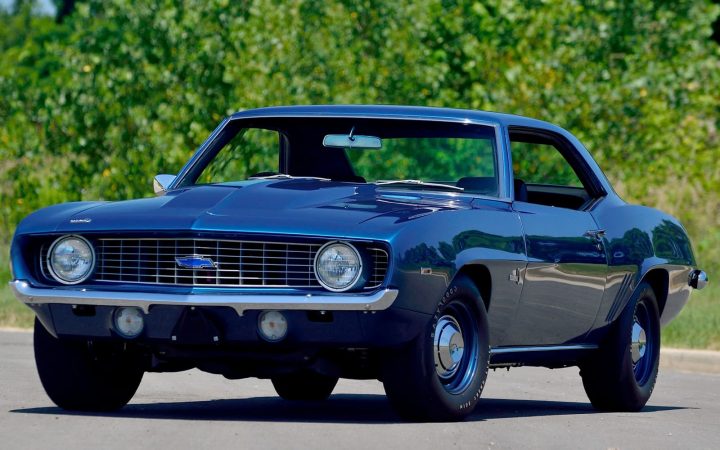 The original Camaro ZL1 muscle car was created with one single goal in mind: to go a quarter-mile faster than any other car.

The 1969 Camaro ZL1 was the brainchild of Fred Gibb, a Lagarpe, Illinois dealer. Gibb came up with the idea of installing a big engine in a small car. His co-worker and drag racer Herb Fox helped him with that. Next, Dick Harrell joined them.

Encouraged by the car’s quick sale, he next ordered a whole batch of Camaro’s designed specifically for drag racing. Under the hoods of those cars was a V-eight-cylinder ZL1 engine designed for racing cars competing in the Can-Am championship. 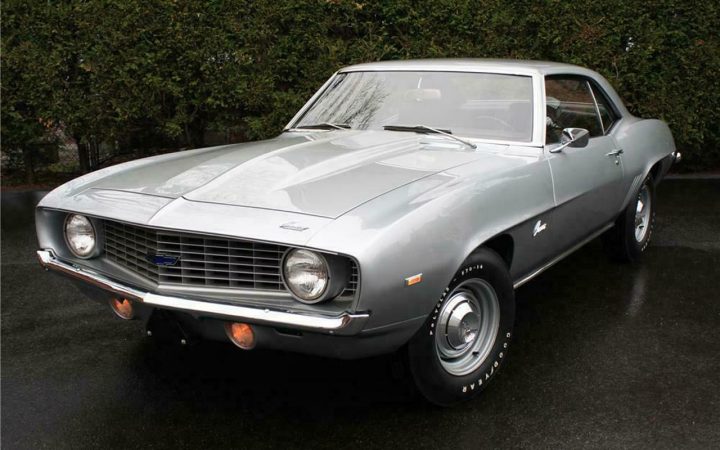 The ZL-1 engine was unlike any other GM powertrain of its day. It could be compared, and only loosely, with the L88 Corvette eight-cylinder race engine, though made of aluminum rather than cast iron. The reciprocating assembly included a forged steel crankshaft, forged pistons sliding along steel cylinder liners, and aluminum cylinder heads covering the combustion chambers. The engine was equipped with a Holley 850-Cfm four-chamber carburetor.

The hoods of all ZL-1 cars have bulged with holes that act as air ducts. Through them, the cold air pressurized at the base of the windshield flowed into the engine.

The Chevrolet Camaro ZL1 with 430 horses under the hood, often participated in the quarter-mile races. The car was produced in a coupe and convertible bodies until 1969 at two plants in the U.S., also assembled in Belgium, Switzerland, Peru, Venezuela, and the Philippines.