Top 10 Fastest Cars in the World

They are sold at auctions for hundreds of thousands or even millions of dollars. Supercars embody the best engineering solutions available in automotive world. They have gone a long way from scary analog racing vehicles to hypercars with carbon-fiber bodies, titanium chassis, hybrid electric powertrains and many electronic assistants for your safety. Today supercars reach the speeds that seemed unimaginable decades ago.

It is not an easy task to tell what is the fastest cars in the world as long as some of them show the fastest acceleration, some reach the highest maximum speed and others perform best on tracks, where chassis and balance matter just as much as the powertrain.

Besides, there is always an issue of official acclaim, with some of the manufacturers failing to meet the conditions for record setting. Anyway, all of the supercars in our list are amazing road and track machines and deserve to make the top ten fastest cars in the world. 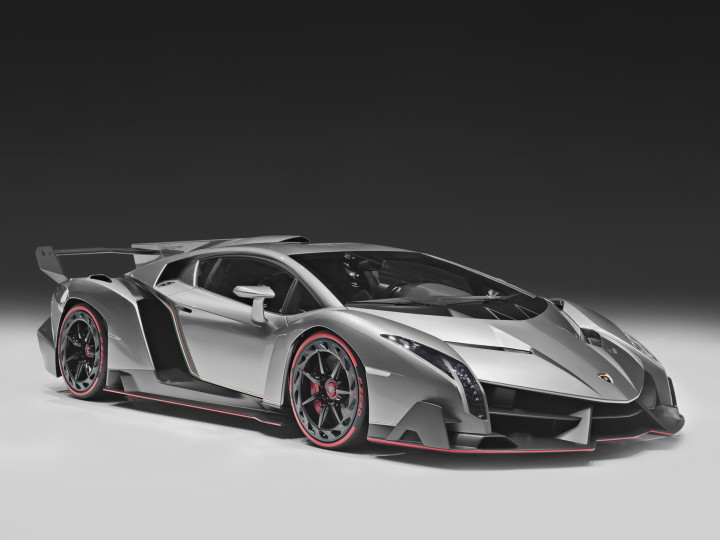 Lamborghini Veneno is not as fast as Bugatti Veyron or Hennessey Venom GT. However, we put it on our list as it is one of the fastest of all cars, powered by naturally aspirated engines. Translated as poison, Veneno has no turbochargers whatsoever, no hybrid technologies, just raw power of an honest V12 engine, delivering 740 hp and over 530 lb·ft of torque. Lamborghini only built five Veneno based on Aventador platform to commemorate the company’s 50th anniversary.

Two of them stay with Lamborghini, while the other three found their owners in the USA and Asia despite a staggering price tag of around $4.5 million. Veneno is slightly more powerful and faster that Aventador and features unique design with Italian flag inserts. The all-wheel drive supercar accelerates from 0 to 60 mph in just 2.7 seconds and reaches the maximum speed of 220 mph. Veneno is by far the most exclusive and expensive cars ever built by Lamborghini. 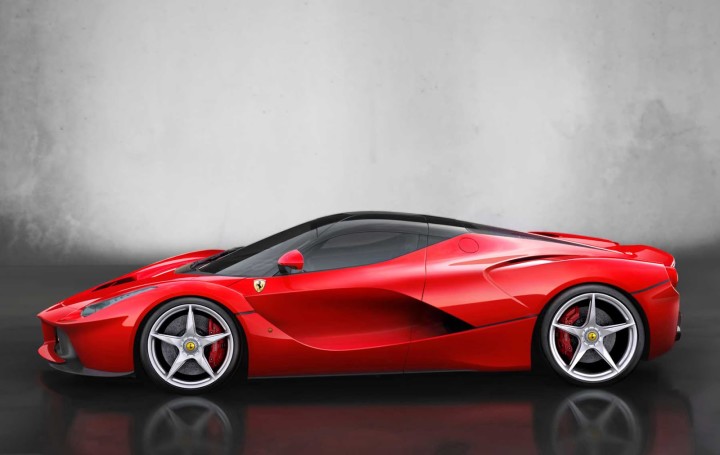 The legendary Italian manufacturer doesn’t produce hypercars capable of reaching the speed of 260 mph. However, since 1939 Ferrari has earned the unrivalled reputation in the world of sports cars and we couldn’t but include one of their cars in our list. And if you look at Ferrari’s lineup, it becomes clear that LaFerrari is undoubtedly the one. Translated as The Ferrari, this ultimate sports car is the focus of engineering genius the company has accumulated for decades.

The model replaced an iconic Enzo in 2013 and became the brand’s first car with a hybrid powertrain. The 499 units built in from 2013 to 2015 are powered by a 6.3 L V12 engine and the electric motor as well as kinetic energy recovery system called KERS. The entire hybrid unit delivers a hefty 950 hp and 664 lb·ft of torque. LaFerrari accelerates to 60 mph in just 3 seconds and is capable of reaching the maximum speed of over 227 mph.

Combining the technical excellence and breathtaking Italian design, LaFerrari is the company’s flagship supercar and one of the most exclusive offers in the world of fast automobiles. This excellence comes at $1.7 million price. 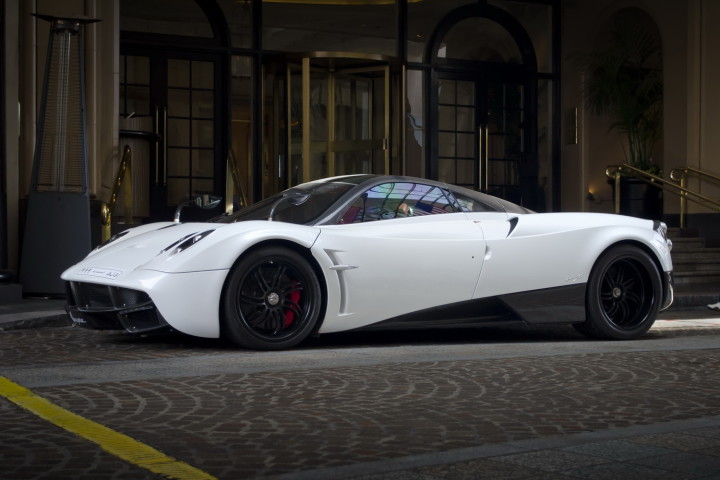 The Italian manufacturer from Modena that got famous after launching its first car, Pagani Zonda, back in 1999, has already become one of Europe’s leaders in creating the ultimate track machines, outperforming the best in class. If Zonda proved to be the company’s successful pilot project, Pagani’s second model that was revealed in 2011, named Huayra, incorporated their best engineering and design innovations to date.

The rear-wheel drive supercar is powered by 6.0 L V12 bi-turbo engine, originally Mercedes-Benz AMG, producing 720 hp and 740 lb·ft of torque. Huayra is capable of running at the maximum speed of 230 mph and accelerating to 60 mph in just 3.2 seconds. However, Huayra’s primary advantage over the rivals is its unprecedented manoeuvrability on tracks as its fantastic chassis has been acclaimed by the best testers and racers in the world.

The car’s light weight also plays a huge part in the vehicle’s incredible performance on tracks as the body is made of peculiar material named carbotanium, developed by Pagani’s engineers. Yet, breathtking specifications are not the only feature Huayra stands out for. The car stuns its owners and amateurs with exquisite interior, a true masterpiece of the automotive world. $1,600,000 is the only obstacle separating us from this gorgeous Italian supercar. 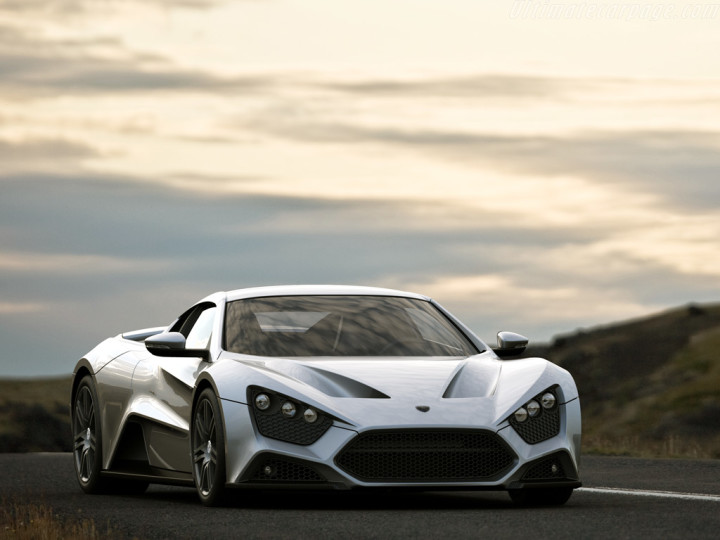 You might have not heard of the Denmark-based manufacturer named Zenvo yet, but these guys made a bold move in 2009, introducing Zenvo ST1 sports car. It is entirely hand-built, features many electronic assistants and such perks as keyless entry or navigation system. However, what truly draws attention to the car is its incredible powertrain. 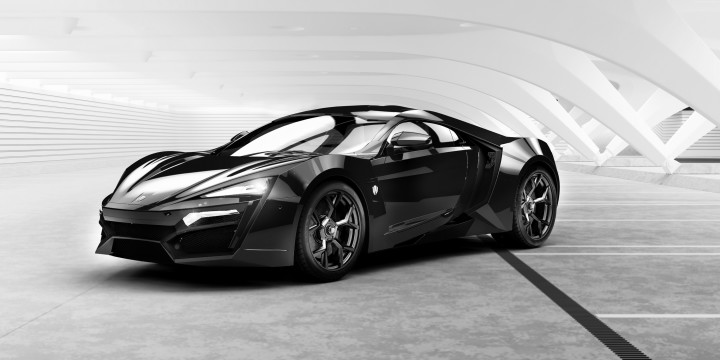 Lykan is a relatively new name in the world of supercars. A Lebanon and the United Arab Emirates product, Lykan is the first company from the Middle East to produce a sports car. Only seven units of the HyperSport model have been built so far, but it has already entered the lists of the fastest supercars in the world. Powered by a compact 3.7 L twin-turbocharged 6-cylinder engine, producing 780 hp and 708 lb·ft of torque, Lykan HyperSport is capable of reaching the maximum speed of 240 mph and accelerating to 60 mph in 2.8 seconds.

Despite showing relatively modest figures for a supercar, each of the seven HyperSport models cost its owners around $3.4 million courtesy of multiple embedded jewels. Headlights decorated with diamonds and seats with gold stitches are just several examples of the vanity Lykan vehicles are known for. One of the HyperSports was ordered by the police department of Abu Dhabi. The car also featured in computer games and Furious 7 movie. 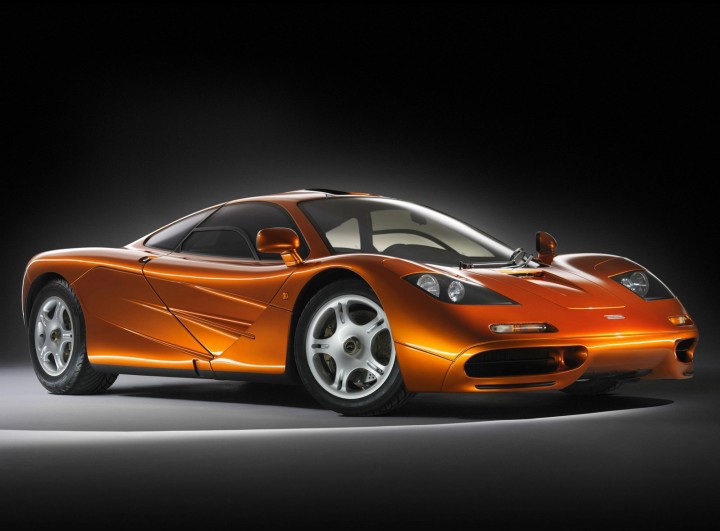 McLaren F1 has a special place in the history of supercars. Introduced in 1992, McLaren F1 had been the world’s fastest production car for about a decade and still makes it to the elite in the world of speed. F1 is truly more than simply an ex-world’s fastest car. Parading with exquisite carbon-fiber body, gold-lined engine compartment, monstrous 6.1-liter V12 by BMW and extraordinary driver’s seat placed at the center of cockpit, McLaren is hailed as one of the most innovative and coolest cars ever built.

The BMW V12 engine produced an astonishing 627 hp and 480 lb·ft of torque, accelerating F1 to the maximum speed of 242 mph, which was an unbelievable record-beating figure in 1992. Very few cars managed to beat McLaren F1 even 25 years after its launch. Its successor, McLaren P1, introduced in 2013, featured a hybrid powertrain and the latest engineering developments, but failed to reach F1’s extreme level of hype. 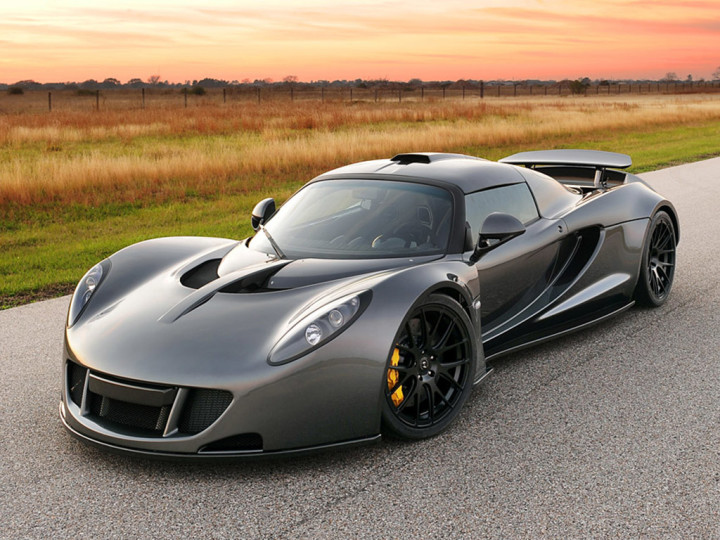 Hennessey Venom GT might not be the fastest car in the world, but it holds the record of the fastest accelerating car from 0 to 200 mph as it only takes Venom GT 14.51 seconds to do that. The tuning house, based in Texas, launched the ultimate supercar Venom GT in 2010. Based on Lotus Exige chassis, the supercar is manufactured in England at the Silverstone factory. Venom GT is powered by the 7.0 L turbocharged V8 engine, borrowed from GM.

This monster produces over 1,200 hp and as much as 1,155 lb·ft of torque. This raw power is transmitted to rear wheels by the 6-speed manual transmission from Ricardo and is capable of accelerating the car to the maximum speed of 267 mph. However, Hennessey failed to comply with official regulations when trying to register the car’s record time, so it remains on the sidelines of many supercar charts.

Yet it is undoubtedly one of the most prolific and fast production vehicles to grace the automotive world. Hennessey has been planning to reveal Venom GT’s successor, Venom F5, for a while now. The brand new performance car from the studio is expected to be driven by some 1,400 hp engine and to be able to reach the maximum speed of 290 mph. 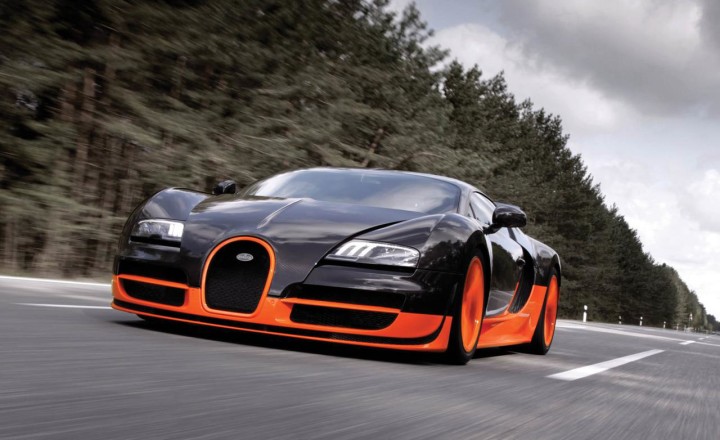 The legendary French manufacturer Bugatti has recently introduced its brand new super car Chiron at the Geneva Motor Show. The monstrous hypercar, driven by an astonishing powertrain delivering 1,500 hp of power and around 1,180 lb·ft of torque has been developed to overshadow its predecessor, Veyron, and leave the rivals with something to think about. However, Chiron has not been widely tested yet and the figures provided by the manufacturer are yet to be confirmed.

Hence we included the most powerful version of its predecessor, Bugatti Veyron Super Sport, to our list. Driven by 16-cylinder, quad-turbocharged, 8.0-liter engine, it is hardly any less inspiring than the latest model from Molsheim. Veyron Super Sport is one of those cars that make you turn your neck at the sight of it. Veyron provided tremendous 1,200 hp and 1,100 lb·ft of torque and was officially able to reach the speed of 267 mph.

The quarter of a mile was reached in less than 10 seconds, while acceleration to 60 mph only took 2.4 seconds. Only thirty of these vehicles were produced and, quite remarkably, the claimed price of around $2.5 million was well below the real production value as Bugatti owner, Volkswagen Group, built them for marketing and representative reasons, proving the technical potential of the group. 450 units of Bugatti Veyron were built by 2015, when the car was discontinued.

Now car enthusiasts around the world are expecting its successor, an incredible Bugatti Chiron, to show the company’s latest achievements. But Veyron has become a classic supercar, unrivalled on the roads and in the level of hype around it. 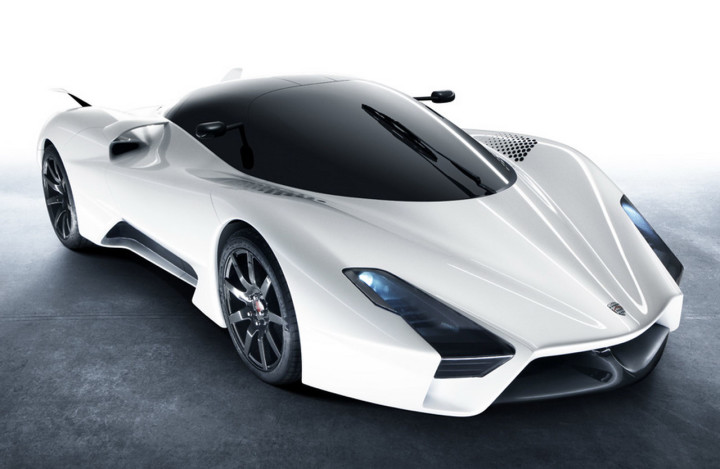 SSC Aero, produced by SSC North America from 2006 to 2013, has already become a solid member of the best supercars’ club as it used to be world’s fastest production car from 2007 to 2010. However, once beaten by Bugatti Veyron, SSC enrolled in developing a more powerful successor to Aero TT.

In 2015 the company revealed the breathtaking SSC Tuatara. This razor-styled monster is powered by 6.9 L twin-turbocharged V8 engine, producing an astonishing 1,350 hp and 1,280 lb·ft of torque. The model has not been officially tested yet, although is expected to reach the maximum speed of 276 mph, accelerating to 60 mph in 2.5 seconds. SSC Aero had very few electronic systems installed, making it the ultimate driver’s car.

SSC Tuatara has been tipped to have more electronic aids to help the driver manage the monstrous powertrain, installed in the car. Unlike its predecessor, SSC Tuatara features an extremely sharp exterior, reminding of Lamborghini design. 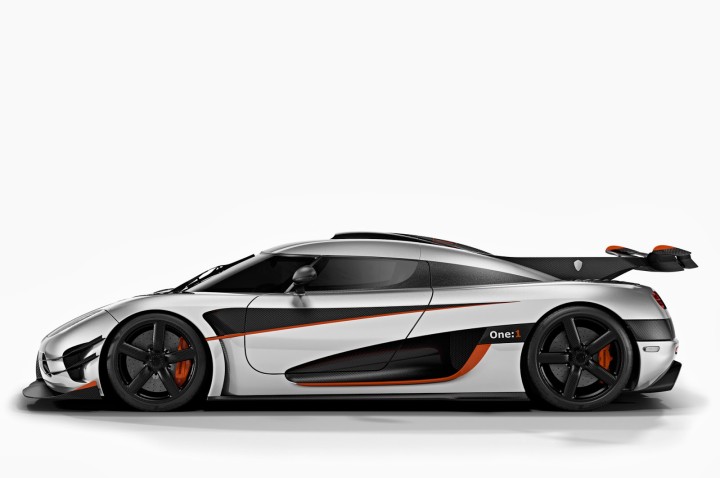 Here is the world’s fastest car and it might come as a surprise for those who do not follow the latest news in automotive world. The Swedish manufacturer of supercars, Koenigsegg, introduced its ultimate vehicle Koenigsegg Agera in 2010 and has since made multiple modifications, including Agera R, Agera S and Agera RS. However, its latest variant, named simply Koenigsegg One:1, proved to be the ultimate version of Agera model, discontinued in 2016.

The name stands for fantastic power to weight ratio, which is 1,361 hp to 1,361 kg. At the same time, this power is an equivalent of one megawatt, which makes Koenigsegg One:1 the first megacar in the history of sports cars. Such incredible power, along with immense torque, is produced by 5.0 liter twin-turbocharged V8 engine. Only seven units of Koenigsegg One:1 were built, and the vehicle has not been officially tested at top speed.

However, according to the manufacturer, and based on Agera RS tests, One:1 model should be capable of reaching as much as 280 mph, which makes it the fastest sports car on the planet.

Of course, there are more fantastic sports cars that could make it to our list. Aston Martin One-77, Koenigsegg CCR, Porsche 9ff GT9-R or Nissan GT-R just to name a few. They are all incredible cars that deserve to be mentioned.

Besides, manufacturers from Europe, America and even Asia keep investing in the development of the fastest and the most technologically advanced vehicles, so we are definitely going to see more fantastic cars in the years to come.