Top 10 Most Expensive Cars in the World

These cars are from another world. They are not for everyone. They are produced to become legends. These cars are raising the standard of all other vehicles. They will definitely make you turn your head if you see them passing. They cost a fortune. How much?

It’s time to find out what the most expensive cars in the world are, why they cost so shamelessly much and why they make car enthusiasts and car collectors from all over the world so excited. 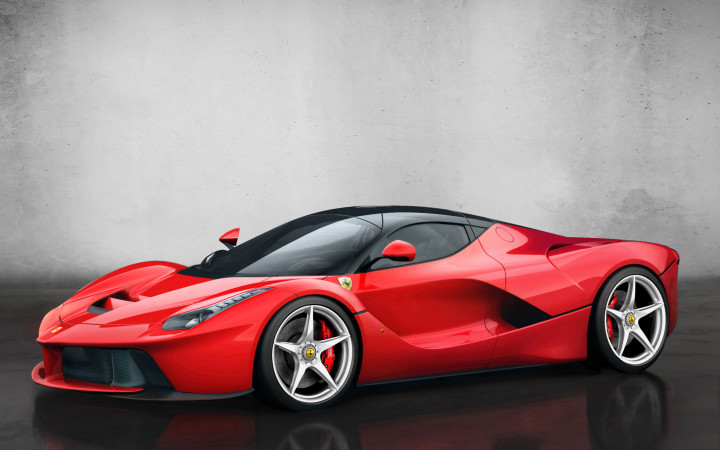 Ferrari LaFerrari is a fascinating supercar that is intended to reflect the essence of Ferrari brand. The car was introduced in 2013 at Geneva Motor Show. It’s the fastest Ferrari road car and one of the most powerful production cars in the world. 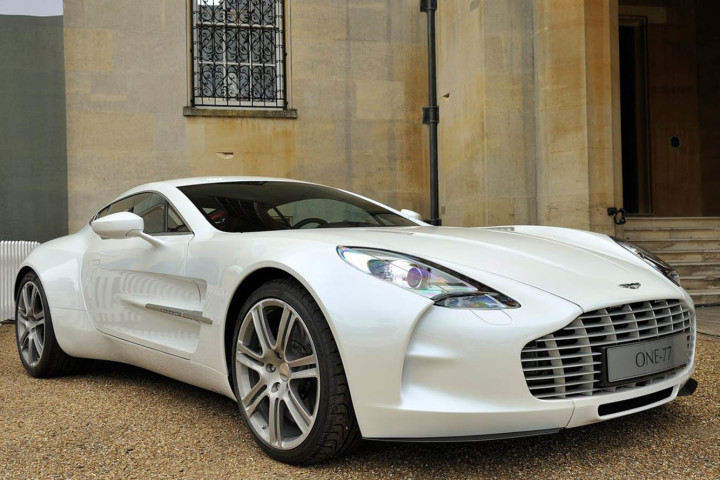 Just like any other Aston Martin this car is a sophisticated combination of power and beauty. It is the mixture of tradition and innovation as it was built using modern technologies and old-fashioned engineering approach. The Aston Martin One-77 is an elegant hypercar of limited production introduced in 2009 at Geneva Motor Show.

It was engineered with the aim to reach a new level of speed, design and price. And the mission was complete in spite of the global financial crisis burst at the time. The car name gives a clue that only 77 unique examples of this model were produced. This stunning car rear-wheel drive is powered by 7.3 liter V12 specially designed for One-77.

Each engine for all 77 cars is hand crafted, just like the rest of the vehicle. Look at the body of the car. There are almost no cut lines. There is no bumper line. It looks like one form, simple and complicated at the same time. One-77 is not less than a piece of art and source of inspiration. 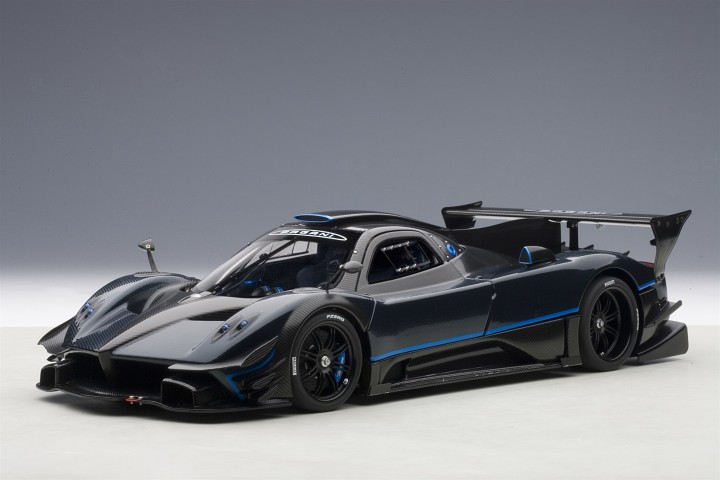 Pagani Zonda Revolucion is a hyper car designed by Italian automobile manufacturer Pagani. This is the final track version of Zonda model and the fastest Pagani car. The custom built 6.0 liter V12 Mercedes AMG produces 800 hp. The central monocoque is composed of carbon-titanium that makes the car not only rigid but super light.

The dry weight is just 1.070 kg or about 2.000 pounds. 6 speed sequential magnesium transversal and sequential gearbox with automatic Engineering AMT system. The Zonda Revolución also has a Drag Reduction System on the rear wing.

This aerodynamic device allows adjusting the rear wing at any time either manually or automatically. 2.4 million dollars is quite a fair price for the blend of art and science. 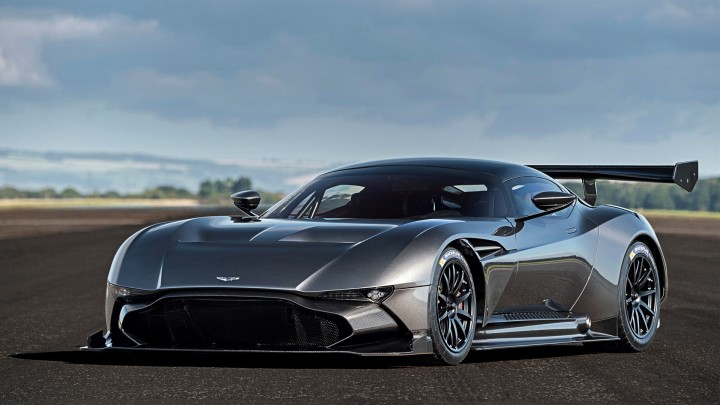 Currently Aston Martin Vulcan is the most exiting offer from the legendary British manufacturer. It was introduced in 2015 at Geneva Motor Show. This model is a luxurious limited edition track-only supercar.

It has carbon fiber chassis tub that features light but at the same time stiff base structure. The Vulcan is driven by 7.0 liter V-12. Thanks to the combination of vast rear wing and great underbody aero, enormous down force is produced that could glue the car to the ceiling at 190mph. It is simply sensational from inside and outside. 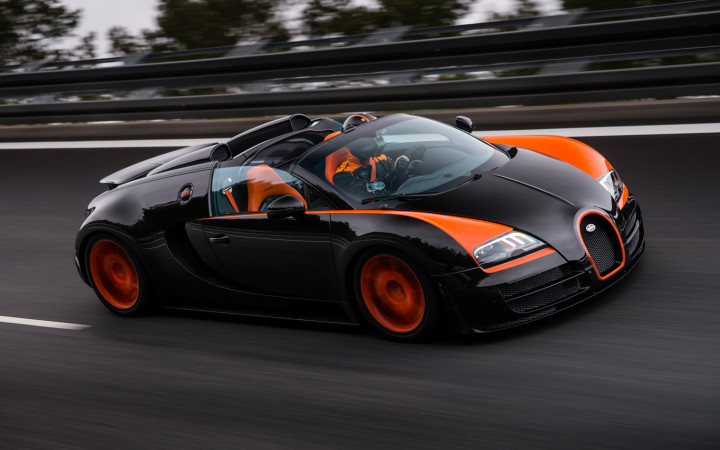 Meet Bugatti Veyron 16.4 Grand Sport Vitesse, the version of Bugatti Veyron 16.4 Super Sport. It is one of the fastest and most powerful convertible cars in the world. Vitesse is a French word and is translated as ‘speed’. The car proved such name by reaching the top speed of 254.04 mph and setting a new Guinness World Record in 2013.

It is not only extremely fast but it’s also incredibly comfortable to drive even with the roof off. New spoiler and wind deflector provide comfort driving with the roof off even at high speeds. Veyron power comes from 8-liter turbo-quad W16 engine. The entire body is carbon fiber.

The gearbox is a 7-speed direct shift gearbox. The Grand Sport Vitesse is a masterpiece delivering fantastic experience to its driver. 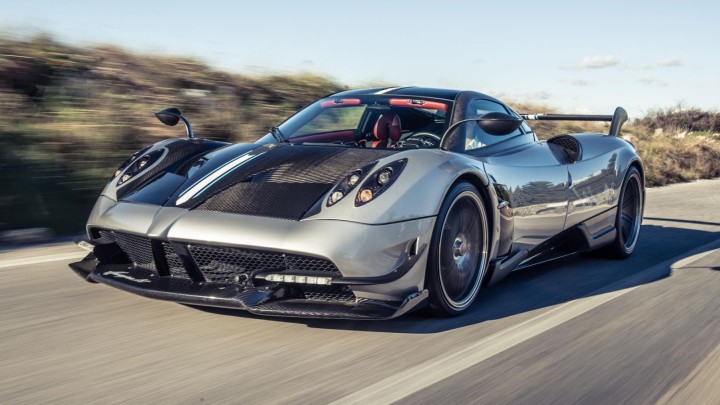 The power of this fabulous car comes from AMG-sourced 6.0-liter V-12 twin turbo engine. New type of carbon fiber, which is claimed to be 50% stronger and 20% lighter than before, helped to reduce the dry weight of the car which is just 1,350 kg or 2,700 lbs.

The inspiration for this car development was derived from the air and all its forms present around us, especially the wind. The Huayra BC is a light breeze in its elegant form and a powerful hurricane in its performance. 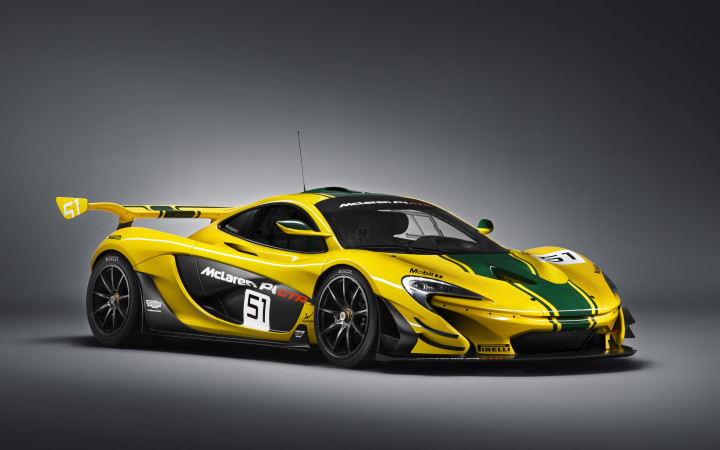 The McLaren P1 GTR is a track-only version of McLaren p1 hybrid sports car of limited production. Moreover only the owners of McLaren P1 have a chance to buy this exclusive car. Why is it so special to be on the list of the most expensive cars in the world? Let’s start with its promising name.

In 1995 iconic McLaren F1 GTR won The 24 hours of Le Mans. In 20 years McLaren releases McLaren P1 GTR commemorating that great victory. In addition to having the incredibly fast and powerful car its lucky owner joins the McLaren P1 GTR program, which can include the possibility to take part in races at the most famous circuits and take a driver training provided by the experts working with F1 champions.

The ownership program also includes access to the resources and exercise of the McLaren Technology center. 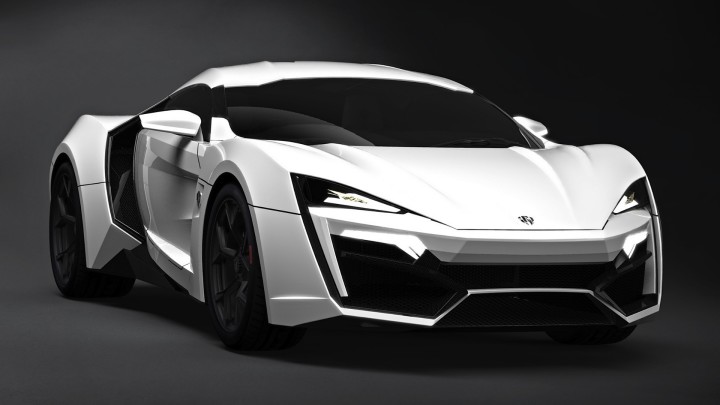 The luxurious Lykan Hypersport deserves attention not only because of its price. It is the first Arabic supercar and it comes from Lebanon. The rear wheel drive car is powered by 3.7-liter twin-turbo flat-six engine. This is the first car to have LED headlights encrusted with diamonds.

Actually customers have a choice of precious or semi-precious stones to be used for the headlights decoration depending on the car color. The car features the holographic display system that allows interaction with the car’s interface by interactive motion.

One can find V letter almost everywhere on the vehicle. It was used for a reason. V means seven in Arabic. And only seven customized cars were planned to be produced. 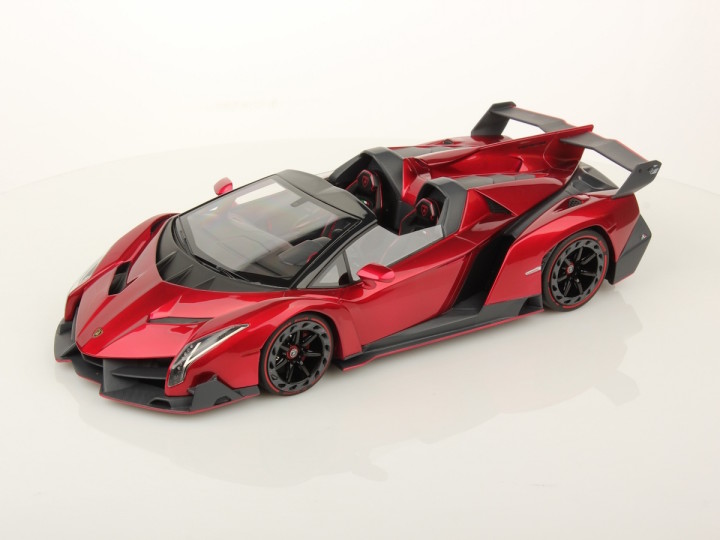 The Lamborghini Veneno Roadster is an Italian supercar released in 2013. It is considered to be the best proof of the Lamborghini innovation power. Like other Lamborghini models this extraordinary car was named after fierce and pretty fast fighting bull called Veneno who defeated the torero in 1914. The mighty all-wheel drive vehicle is powered by 6.5-liter V12 engine.

It is equipped with fast-shifting 7-speed ISR transmission. The Veneno monocoque is entirely made of carbon fiber which makes the car quite light — the dry weight is just 1,490 kg or roughly 3,000 lbs. Some interior details are taken from the legendary Lamborghini Aventador. But Veneno is definitely a more brutal car with undoubtedly insane performance. 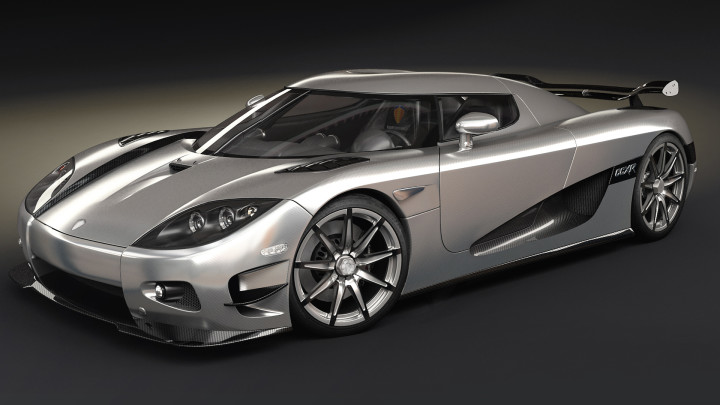 The winner of our list is the car from Sweden. The Koenigsegg CCXR Trevita is currently the most expensive vehicle in the world. It is an extremely beautiful fully hand-built super car. Trevita stands for ‘three whites’ in Swedish. Only three of these extraordinary cars were manufactured. Actually they are silvery white thanks to unique white fiber coating that sparkles as if the car is made of diamonds.

Besides it has detachable hardtop that can be fit under the front hood lid. It is enjoyable in all its amazing numerous details. Every bolt and every curve of it seem to be perfect.