The Most Popular Brands of the American Cars 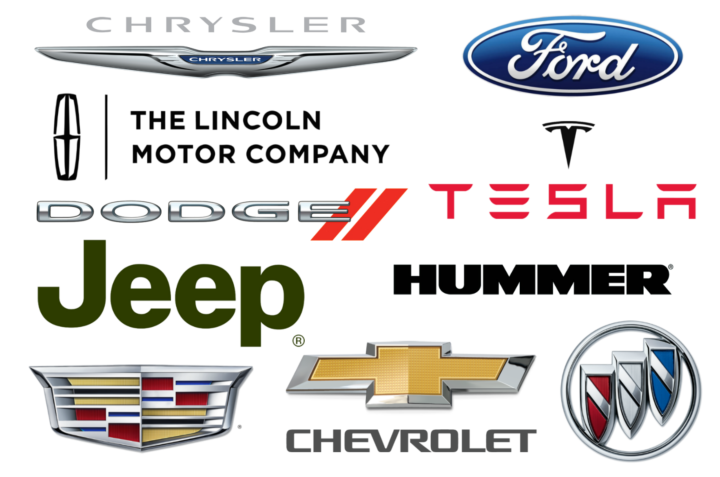 The multitude of the American car brands resembles species of wild animals within the tropical rainforest. Their external appearance varies greatly, so do the emblems of their brand names. They depend on the natural economic environment and the Darwinian rule about the survival of the fittest influences their existence.

The word “fittest” does not equal the word “best” because it is often more profitable for the industry to manufacture many cheap cars instead of few expensive cars. There exist the mutations, the evolution, the extinction, the ecological niches, the inheritance of the traits and even the horizontal transfer of the genes in the form of the shared development.

The Chrysler brand of the cars was established in 1925. It is named after Walter Chrysler who was the creator of the initial company. This brand is used mostly for expensive luxury cars but was also used for the cheaper practical cars and will be used for mainstream cars with the premium features.

The Dodge brand of the cars was established in 1900 and was named after the Dodge brothers — the creators of the initial company. This automobile brand belongs to the Fiat Chrysler Automobiles multinational corporation. The modern emblem of the brand comprises the shield with the crosshairs and with the name of the brand. This brand has been used mostly for practical cars, trucks and other vehicles. It has been famous for the reliability of the cars since the World War II. Today the Dodge brand is also used for performance cars. Shared development gave company the chance to decrease cost of vehicles. Thus affordable price is the additional benefit making cars of this brand a good choice for the everyday usage.

The Jeep brand of the automobiles was established in 1941. But the word in its generic meaning has been used since at least 1914 when the mechanics used it to name the new type of vehicles purposed for testing. This word obtained worldwide fame during the World War II when the four-wheel drive Willys MB Jeep vehicles were mass-produced for military purposes. This automotive brand belongs to the Fiat Chrysler Automobiles multinational corporation and is used only for off-road and sport utility vehicles. The Jeep emblem is the brand name written in the simple bold font. The modern Jeep Wrangler models have excellent off-road capabilities thanks to their genuine solid axles known for the durability, strength and awesome articulation.

The Ford automotive brand was established in 1903 and was named after Henry Ford who had created the Ford Motor Company to which this brand belongs since those times. Henry Ford is famous worldwide because he introduced the innovative methods for the manufacturing known as the Fordism — for example, the moving assembly lines for mass production. The Ford Motor Company remains under control of the family of the initial creator. The modern emblem of the brand comprises the name of the company within the blue oval with the white line along the edge. Rational management helped the Ford Motor Company succeed even during the times that were difficult for many other companies. This brand is used for the extensive spectrum of mainstream vehicles from affordable compact cars to heavy duty trucks, while the luxury cars from the Ford Motor Company are marketed under the Lincoln brand.

The Lincoln luxury vehicles brand is used by the Lincoln Motor Company. It was created in 1917 by Henry Leland and purchased by the Ford Motor Company in 1922. It marked the personal victory of Henry Ford over Henry Leland. The modern emblem of the brand represents the star with the four cross-like rays within the vertical frame. Model range of the brand comprises sedans, crossover utility vehicles and sport utility vehicles. Luxury pickup trucks were produced under this brand at some points of the company history. The Lincoln Motor Company is well known as the manufacturer of custom-built vehicles of excellent comfort and safety. Many presidents of the United States, including Franklin Delano Roosevelt, used vehicles of this brand as official presidential state limousines.

The Buick brand name is used by the General Motors Company for premium cars that are more luxurious than the cars under the mainstream Chevrolet brand, but more affordable than the cars of the flagship Cadillac brand. The Buick Auto-Vim and Power Company was created in 1899. Later it became the foundation of the General Motors Company, thus the Buick brand is the oldest active brand of the American automobiles. The modern emblem of the brand, the Buick Trishield, comprises three shields in the American patriotic colors within the ring and is based on the coat of arms of David Dunbar Buick who was the creator of the initial company. The vehicles under this brand are famous not only for their luxury but also for their reliability. The best yearly volume of sales was achieved by the brand in 2015.

The Cadillac brand name is used by the General Motors Company for the prestigious luxury automobiles. These cars permanently hold the top place among the most luxurious vehicles within the United States. The Cadillac Automobile Company was established in 1902 on the base of the Henry Ford Company factory. The emblem of the Cadillac brand, the red-yellow shield behind the chrome grille, is based on the coat of arms of the French explorer Antoine Laumet de La Mothe, sieur de Cadillac, who founded the Detroit city in 1701 and after whom the company was named. Technological advancements and precision of manufacturing made it possible for the company to introduce interchangeability of component parts and mass production of reliable automobiles to the world.

The Chevrolet brand name is used by the General Motors Company for mainstream automobiles. It was established in 1911 when the Chevrolet Motor Car Company was created by Louis Chevrolet and William Durant who had earlier created the General Motors Company but been ousted from it by the shareholders. The exact origin of modern emblem of this brand name, the golden bowtie, is not known for sure, but the most romantic version is that it represents the Swiss cross in honor of the country where the ancestors of Louis Chevrolet lived. The phrase “a car for every purse and purpose” worded by Alfred Sloan is the principle on which the design of these affordable automobiles from compact cars to medium trucks is based. This brand name is also famous for its excellent advertising campaigns — numerous followers praise the ideas seen, heard and read in the campaigns.

The Hummer brand name is used by the General Motors Company for military style pickup trucks and sport utility vehicles. It was established in 1992 when the AM General company introduced the civilian version of the M998 Humvee military vehicle, production of which was discontinued mainly because of practicality — large size and other military features of these automobiles are suitable for battles but not so much for calm civilian life. The emblem of the Hummer brand is the name of the brand in capital letters. Simple bold font is used for the emblem. The General Motors Company has allowed some other companies to use the Hummer trademark so that now, for example, electric quadricycles are produced in the United Kingdom under this brand name.

The Tesla automotive brand name was established in 2003 when the Tesla Motors Corporation was created. The brand was named after Nikola Tesla — famous physicist and electrical engineer. The emblem of the Tesla brand represents the large first letter of its name with the full name written under the large letter. The font with letters resembling electrical sparks or contact prongs is used for the emblem. The company manufactures electric cars, components and batteries. Tesla created the Tesla Roadster that is the first highway legal all-electric car and the Tesla Model S that combines excellent 5-star safety rating with the fastest acceleration among all cars produced today. Tesla Model S was the best-selling plug-in electric car in 2015.

In this article we have explored the most famous brands of the American automobiles — their histories, distinctive features and iconic emblems that are recognized instantly all over the globe. Corporative competition and sometimes cooperation have created the beneficial economic environment for the diverse brands to emerge, evolve, thrive and proliferate.